A percentage of the funds raised on this print will be donated to the Surfrider Foundation, as well as  funding a new series of  commissioned prints from other emerging artist. The main purpose of this program is to support new and emerging artists in a unique way: they are paid for their work, they get great exposure, and their work helps fundraise for amazing nonprofits that support our health, our communities and our planet!

My painting was inspired by the countless sunsets and sunrises I’ve witnessed over the ocean that reflects how as each day passes, and when it does, we must realize that the ocean is one of our greatest resources. 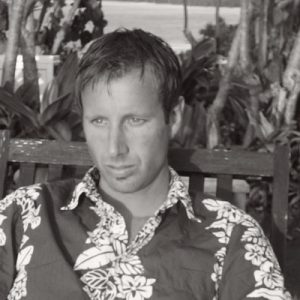 Enviro-Surf’ artist and proclaimed “Earth’s Minister of Propaganda”, Nathan Paul Gibbs was born in Washington State on the Kitsap Peninsula, and raised from 13 on, in North East Florida where he picked up surfing. Since 1999 he lives and works on his art career in South Orange County. Nathan has created surf art work internationally in Fiji, Bora Bora, Moorea, Costa Rica, Mexico, Hawaii and Australia and has shown work in over 6 countries. His work has exhibited and has collectors in Florida, Washington, Oregon, New York, Hawaii, South America, Ireland, Sweden and of course California. He has been in over 60 gallery exhibits, shows, fairs, and been featured in 29 web and print publications. He has created over 400 pieces of art, much of it environmentally based. Self taught, he is influenced by Pollock, Van Gough, Cezanne, and others.

In addition, Nathan wrote and illustrated the acclaimed environmentally conscious story and art book, The Betrayal of Man. Nathan was awarded the 2007 1st Annual Earth Day: “GAIA” Environmental Award for his constant efforts in providing philanthropic support to water related charities. Taking his paintings to a deeper level, Nathan invokes participation from the viewer with a visual, emotional, and cognitive experience. Many pieces attempt to do more than just paint a beautiful wave, or a pretty sunset, it is about a memory, issue or environmental message.